For almost a week, all eyes have been on one crucial link within global supply chains: the Suez Canal. The 400m long Ever Given container ship became wedged on 23rd March reportedly due to a combination of onboard power failure and high winds. Another blow to global trade, the disruption comes amongst an already challenging pandemic for the world of supply chain and logistics.

On Monday 29th March, the Japanese-owned vessel was finally dislodged from the banks of the canal at 3pm local time, allowing it to once again move freely, along with tens of billions of dollars’ worth of global trade, including 11 ships containing 130,000 livestock and tankers responsible for transporting 1.74m barrels of oil across the canal each day.

An astounding 12% of total global trade passes through the canal each year. Originally opened in 1869, the 193km long sea-level waterway has been gradually widened and improved to accommodate up to as many as 97 ships per day. In 2020, more than 18,500 vessels used the canal - approximately 50 per day.

The near week-long ordeal has created a backlog of more than 360 ships, currently stranded in the Mediterranean Sea to the north and the Red Sea to the south, or in holding areas along the length of the canal. Each passage takes between 11 and 16 hours at a speed of 8 knots, as the convoys of ships travel at roughly 10-15 minute intervals.

So what happens next? We sit down with internationally recognized supply chain expert and founder of The Logical Group, Paul Gooch, to discuss this seismic event sending shockwaves throughout global supply chains.

What are your first thoughts about the Ever Given incident? What do you think happened?

It’s a little strange. The initial statements around the grounding were that it was down to mechanical failure. This was denied by the Ship Manager. Then strong winds were to blame, but these are not unusual conditions on the canal. Then the finger was pointed at human error but the bridge would have been fully manned, plus there were two pilots on board..The ship was reportedly going 13.5 knots at the time of the incident, which is well above the usual 8 knots speed limit for container ships in the canal. It appears to have been speeding, despite having 2 ship pilots on board.

There is a phenomenon within fluid mechanics called the bank effect, which refers to the tendency of the ship's stern to swing towards the near bank when the ship is operating in a river or restricted waterway and is influenced by factors like water depth, distance to the bank and speed. As the stern is pulled in, the bow pivots away. Interestingly, before the event you can see, based on marine tracking, that the ship was closer to the left-hand side at the time of the incident, presumably to compensate for strong winds. But it looks like there may have been an overcorrection and then a bank effect has taken place, swinging the bow around and driving it into the canal’s right-hand side. Even more interestingly, this is not the first time the Ever Given has been involved in a wind-related incident. In 2019, it collided with a ferry in Germany while traveling downstream on the Elbe River near Hamburg. A captain was not found to be at fault, instead high winds were blamed for the collision.

How long will the ramifications of this incident last?

They’re talking about several weeks in order to clear the backlog. In terms of prioritization, the basic principle will remain first come first served, though they may need to make exceptions for serious risk cargo, like the livestock, other perishable items or PPE equipment for hospitals, etc. They can probably get the ships through and catch up fairly quickly, but the problem is going to be the logjam it creates in north-eastern European ports. They’ve already become congested and are struggling to keep up with the demand. This has been called the ketchup effect; like shaking a ketchup bottle, where nothing comes out at first and then suddenly it all comes out at once.

Container ships schedules have already been severely disrupted over the last year. They’ve got around a 35% on time delivery performance right now. The schedules have almost become meaningless. Those container ships scheduled back into Asia are going to be delayed, so there’ll be a capacity shortage of ships in Asia by the time they get turned around. This is actually taking a significant amount of capacity from overall container supply in a market that was already short. There’s also been a slow down in container production. So this is a major contributor to the lower reliability and longer lead times we’re seeing for cargo at the moment. I think ultimately they’ll move the ships through the canal again fairly quickly but the knock-on effect will last several months before there is enough of a reset.

Is there a risk of a collision given the number of boats in the backlog?

There are very strict rules in terms of speed and distance maintained between vessels. The northern section of the canal has been built out to have multiple lanes, to free up capacity. The southern section, where the Ever Given ran aground, has just one lane. So if there is any pressure to move ships as fast as they can, if a collision occurs it will probably be in that southern end. But considering what’s happened, the Suez Canal authority will be exercising greater caution. They’ve lost a lot of revenue each day that it was stuck, so they’ll be more cautious to avoid any further incident.

Is there likely to be a lot of litigation?

There will be litigation, for sure. It’s going to be very difficult to unravel all of the insurance cases. In this particular case, you haven’t had anything damaged as far as we know. The ship is sound. No product has been damaged but may be perishable. There have been ships with live animals on board. There are presumably ships with perishable products on board, it may be out of shelf life by the time it arrives at port. It will be a huge undertaking to unravel all of this and to assign blame. It’s a little bit like a multiple pile up on a motorway, trying to unravel who was actually responsible, further along the chain. It will keep lots of lawyers and consultants busy for some time to come I’d imagine.

What can shippers do to mitigate its impact? Both now and in the future?

It has certainly brought into focus the value of predictability and visibility. I was quite impressed by the quality of some of the satellite imagery. You can basically tell exactly where all the ships are, with satellite imagery and location tracking. The delayed shipments and inventory means that shippers will be looking at alternatives. It’s probably sharpened the debate about near-shoring, the old saying about putting all your eggs in one basket. You’re very much exposed to what can happen with this bottle neck in the Middle East so organizations will continue to consider alternative sourcing and routing. There may be more adoption of tools like Shippeo’s which can help to determine alternative routing and optimal lead time development for shippers.

Do you think this is likely to happen again anytime soon?

Well, clearly the Suez Canal Authority has got to have been put on notice for this. They will need to review processes and procedures. The fragility of global supply chains has already been put into focus by Covid, and now even more so with this latest event.

It is very uncommon and unlikely to happen again anytime soon. Thousands of ships pass through the canal every year with only a few minor incidents experienced. However, it’s the increasing size of these ships that’s concerning. They’re really big ships and maybe they’re reaching a point where they’re exceeding the capacity of the canal. It does have its limits. Clearly these extremely high-stacked ships are more vulnerable to wind gusts, so maybe operators will need to look more carefully at weather conditions and create more restrictions and exercise more caution in future, despite the pressure to get ships through the canal as quickly as possible.

The other thing is, this event has really demonstrated the fragility and potential bottleneck that can be created in the Suez canal. It’s been mentioned that around 12% of global trade goes through the canal, but in fact that number is much higher when talking about the proportion of trade traveling between Asia, especially China, and Europe. The sensitivity, the risks of exposure to trade going through the canal has now been highlighted. If anyone wants to be malicious they’ve just witnessed how to quite easily shut down a significant amount of trade. It might require some further military presence. We’ve got to consider these risks. It’s clearly a strategic waterway, not just for container ships but for oil tankers as well, and they may need to reconsider some of their processes and procedures. Longer term, it may lead to more ships slow-steaming around the Cape, seeing this as a better, safer option. Plus European ports are already congested, so in some ways there’s no need to rush. So we might see some diversion there.

So how does Shippeo’s real-time transportation visibility platform help put shippers back in the driver’s seat after an incident like this? Timely information is critical in managing the aftermath of a disruptive event like this one.

The key differentiator though is the accuracy and reliability of Shippeo’s ETA. It is market-leading in Europe and it’s what really counts in the wake of critical events like the Ever Given stranding in providing some certainty and actionable insights further downstream. This helps ensure better decisions are made and risks mitigated as much as possible.

For more information on Shippeo's multimodal ocean visibility or market-leading predictive shipment ETAs, please get in touch with our friendly team of experts. 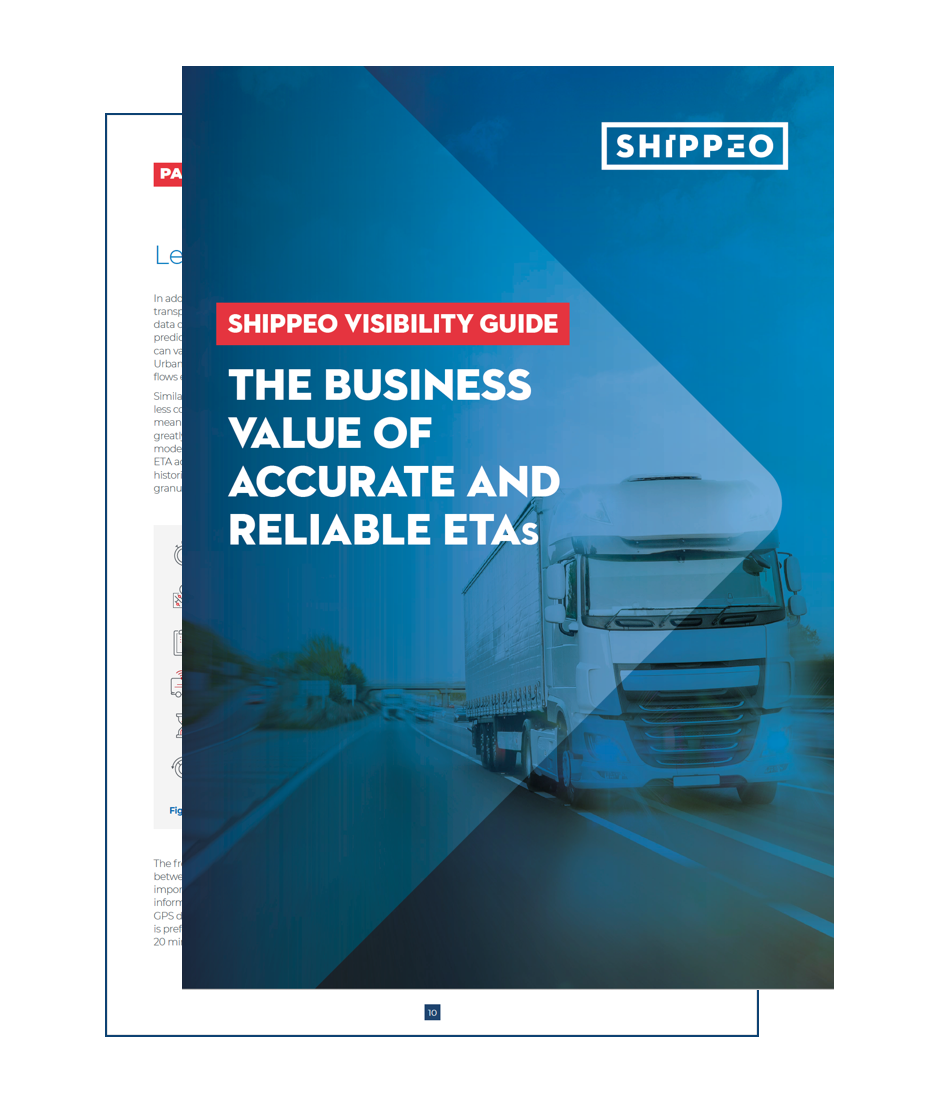 The business value of accurate and reliable ETAs

Discover the best practices for calculating ETAs with market-leading accuracy and reliability. Gartner, Critical Capabilities for the CRM Customer Engagement Centre, 8 June 2020, Nadine LeBlanc, Brian Manusama
Gartner does not endorse any vendor, product or service depicted in its research publications and does not advise technology users to select only those vendors with the highest ratings or other designations. Gartner research publications consist of the opinions of Gartner's Research & Advisory organisation and should not be construed as statements of fact. Gartner disclaims all warranties, expressed or implied, with respect to this research, including any warranties of merchantability or fitness for a particular purpose. GARTNER is a registered trademark and service mark of Gartner, Inc. and/or its affiliates in the USA and internationally and is used herein with permissions. All rights reserved.